The Indian government has been making strides by bringing about reforms and amendments to various labour/human resource legislations and attempting to harmonize a hitherto archaic and unattended system. 2014 onwards we saw a sea of changes which can be characterised as follows: 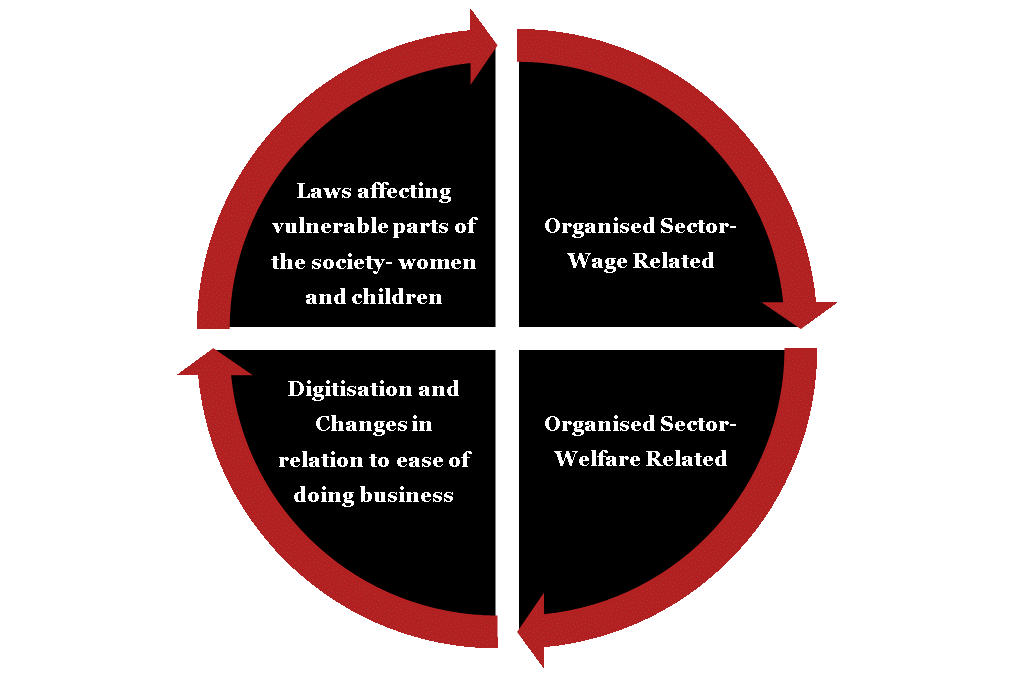 Upliftment of vulnerable parts of society

Women and children have been largely benefitted by the amendments suggested in the past few years. The two major achievements having come from the much talked about amendment to the Maternity Benefit Act and the Child Labour Prohibition Act. Consequently, even the ESIC has been amended to be aligned with the same in 2017, where a commissioning mother and adopting mother are included in insured women.

With the increase in paid maternity leave to 26 weeks from 12 weeks as it existed prior to the amendment, India has risen to rank above most of the developed countries below only the Scandinavian countries that have the most extensive maternity (and paternity) benefits.

The Maternity Benefit Act also prescribes provision of crèche facilities by corporates (however there is no clarity on the working of this yet).

As regards protection of children, the minor population has been further divided into those who are guaranteed the right of education and adolescents. Further industry classification has been simplified. The definition of Child has been amended to include anyone under the age of 14 and who have been accorded rights under the Right to Education Act. It has been now prohibited to employ children in any firm/establishment with the only exception of a family business. However, no definition of family business has been provided nor are working hours regulated for children in family business. Adolescents can be employed provided the working conditions are fulfilled. The working hours are limited to 6 hours in a day with 1 hour rest in intervals of 3 hours of work. Adolescents cannot work beyond the prescribed 6 hours. Adolescents are prohibited from working in hazardous occupations. The list of hazardous occupations has been reduced to mines and explosive substances. The penalty for employing child labour has been enhanced to 2 years imprisonment with a higher monetary penalty of INR 50,000.

As regards workers in the unorganised sector the following key changes were made in 2017:

Updates having economic impact on corporates and organized sector workers

In the last 4 years the government has taken bold measures to increase minimum wages, the eligibility for bonus, entitlement of PF and other measures thereby providing relief to a large number of low wage workers who were earlier out of the purview of the benefits. A snapshot of the key extensions and limits accorded are listed below:

The above measures have definitely substantially provided relief to the organized sector workers and others in employment. However, these have operated to substantially increase the cost of employment for the businesses and particularly adversely affect the small and medium sectors. Businesses however, have been compensated through other measures that seek to smoothen the compliance process as captured below.

Welfare legislations were revamped and directives issued to welfare organisations such as EPFO and ESIC to ensure that legislative intent/government initiates were supported. One of the path breaking measures is the creation of a UAN for each enrolled member with EPFO.

2018 has opened with a bang and we have witnessed two key changes being ushered in. The Payment of Gratuity Act has been amended to benefit Central Government employees and rules in relation to crèche for mine workers has been promulgated.

As per the amendment “Fixed Term Employment” has now been introduced irrespective of the industry of work. The amendment also directs that no employer of an industrial establishment shall convert the posts of the permanent workmen existing in his industrial establishment on the date of commencement of the Industrial Employment (Standing Orders) Central (Amendment) Rules, 2018 as fixed term employment thereafter.

In order to promote the Start-Up ecosystem in the country and for incentivizing the entrepreneurs in setting up new start-up ventures and thus catalyze the creation of employment opportunities through them, the Ministry of Labour and Employment has vide a direction dated 12 January 2016 (“Direction”) issued an advisory to the States/UTs/Central Labour Enforcement Agencies for a compliance regime based on self – certification and regulating the inspections under various Labour Laws. It was in fact advised that if such start-ups furnish online self – declaration for compliance of 4 labour laws mentioned (viz. Building and Construction Workers Act, Inter State Migrant Workers Act, Payment of Gratuity Act and Contract Labour Act) for the first year from the date of starting the start-up, no inspection under these labour laws, wherever applicable, will take place. From the second year onwards, up to 3 years from the setting up of the units, such start-ups are required to furnish self – certified returns (as is being done under Shram Suvidha Portal under these Acts for the central sphere) and would be inspected only when credible and verifiable complaint of violation is filed in writing and approval has been obtained from at least one level senior to the inspecting officer.

The catch however is that upon completion of the three – year window period, start-ups could still be prosecuted for any non – compliance during the first three years of their operations.

The Shram Suvidha Portal links four major offices of the Labour Ministry like EPF Organisation, Employees State Insurance Corporation (ESIC), Directorate General of Mines Safety and Chief Labour Commissioner. It allows employers to file a self – certified and simplified, single online annual return for them. The employers are provided a Unique Labour Identification Number (LIN) for this, and more than 18 lakh units have already availed of this. Employers are expected to file returns under various Acts. Now, they have been allowed to file a single unified annual return for nine labour laws.

Truth behind the Scenes

At an all-India level, 77% of households do not have even a single regular-wage/salaried family member. At the all – India level, only 47.8 % of the population above 15 years of age has employment. The unorganized sector in India contributes to over 80% of the work force and the laws outlined above only deal with 20% of the workforce. In this situation a thrust is required for ensuring the welfare and social security of the unorganized sector. While India has jumped 33 points in the “ease of doing business” parameter as published by World Bank in 2018 to come to 103rd position, it’s quite saddening to note that India was ranked 4 in the World Slavery Index in 2017. Labour laws are so intrinsically linked with human rights ecosphere of a country that good labour reform needs to be all inclusive. The long – term structural weaknesses of India’s economic reform have been the inability to expand the market for jobs in sync with its demographic growth. Many of these new – age slaves are women and children, the most vulnerable sections on the frontline of economic slowdown and poverty. According to UNDP, India will see a severe job shortage in the next 35 years, the number of the country’s modern slaves is likely to boom.

Indian labour legal ecosystem is complicated for two reasons – Labour is both a Central and State subject. Certain welfare legislation such as Shops and Establishments is state driven, whereas, health insurance, provident fund and pensions are centre driven. To add to the confusion, there are over 44 central legislations and over 100 state legislations. Before a business is commenced, employers are scrambling with compliance issues – registrations, licenses and payments. While a lot has been done to smoothen this process as stated above in the Ease of Doing Business section, it still leaves a lot to be desired. Compliance with labour laws and labour welfare is the back – bone of society. It is imperative that laws are easy to follow and compliance simple to incentivize people for ensuring adherence to these laws.

None of the measures above deal with the quintessential aspect of any legislative framework – namely enforcement of the legislations. Contraventions by employers go unnoticed and even where challenges are made, it is impossible to conclude the same efficiently. The current conciliatory process is laughable to say the least and extremely bureaucratized.

The very institutions that are required to provide service of labour welfare compliance become the red tape slowing down processes and causing corporates to lose interest in the system.

Simplification as a Solution

In light of the existing complexities given the unfettered growth of legislative dictats coupled with (possibly) the largest work force in the world, India’s solution is in simplicity.

One identification number for each employee linked to PAN Card and the same being used across the board by all organisations to provide welfare benefits.

Further codification of the laws in the manner provided below is recommended (includes recommendations by FICCI) by consolidation of laws with commonality of intent: 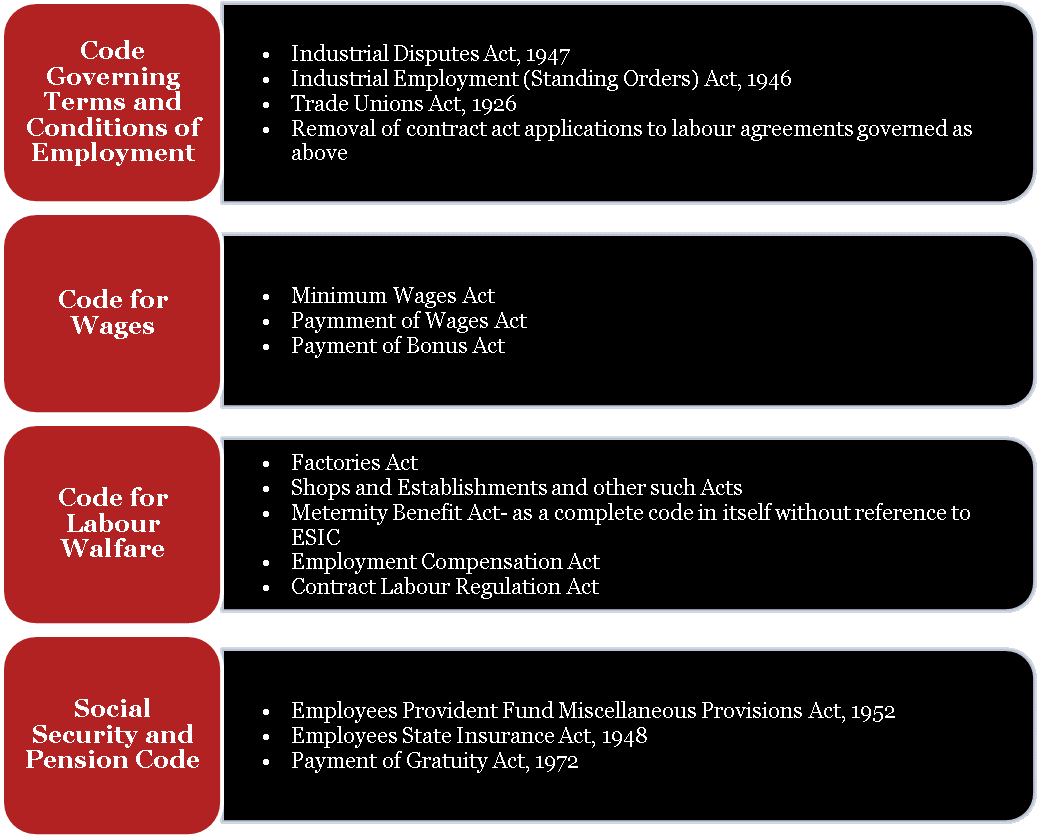 Additionally, overlapping definitions of industry, workman, wage and salary should be removed and one uniform definition to be adopted across the codes.

India is headed in the right direction but more zeal to bring about fundamental changes is required. The Labour Code which seeks to unify the various wage related laws and industrial relations has been moved in Parliament but is yet to be passed.  The important thing is to avoid passing of piecemeal legislations that make the legal environment complex for businesses and to adopt a holistic approach. The approach should be inclusive and bring into mainstream the various unorganized sectors and improve working conditions for the vulnerable sections so that we rise in the human rights index. On another note, ease of doing business in India has come with a cost to the businesses and is therefore not welcome. Changes have to be truly sustainable for businesses with enough time being given for implementation. A case in point being the Maternity Benefit Act, which imposes unreasonable levels of costs in employing women in so far as businesses are concerned. This amendment almost operates as a disincentive for employing women. The government needs to take on welfare measures on its own shoulders instead of requiring business to bear all the burden. After all a low profit economy will only have adverse effect in the long term.

All in all, a simple law will be an efficient law. While simplifying the following questions need to be answered:

Of course, each of these considerations needs to be weighed against one another.

Previous Publications of ALA in Business Manager:

We can be contacted at contactus[at]agamalaw.com